(I apologize for the redundancy. Earlier posts have presented very similar information, but this composition was put together recently for a publication. We are very pleased with how it turned out and would like to share with our friends and family to read once more.) 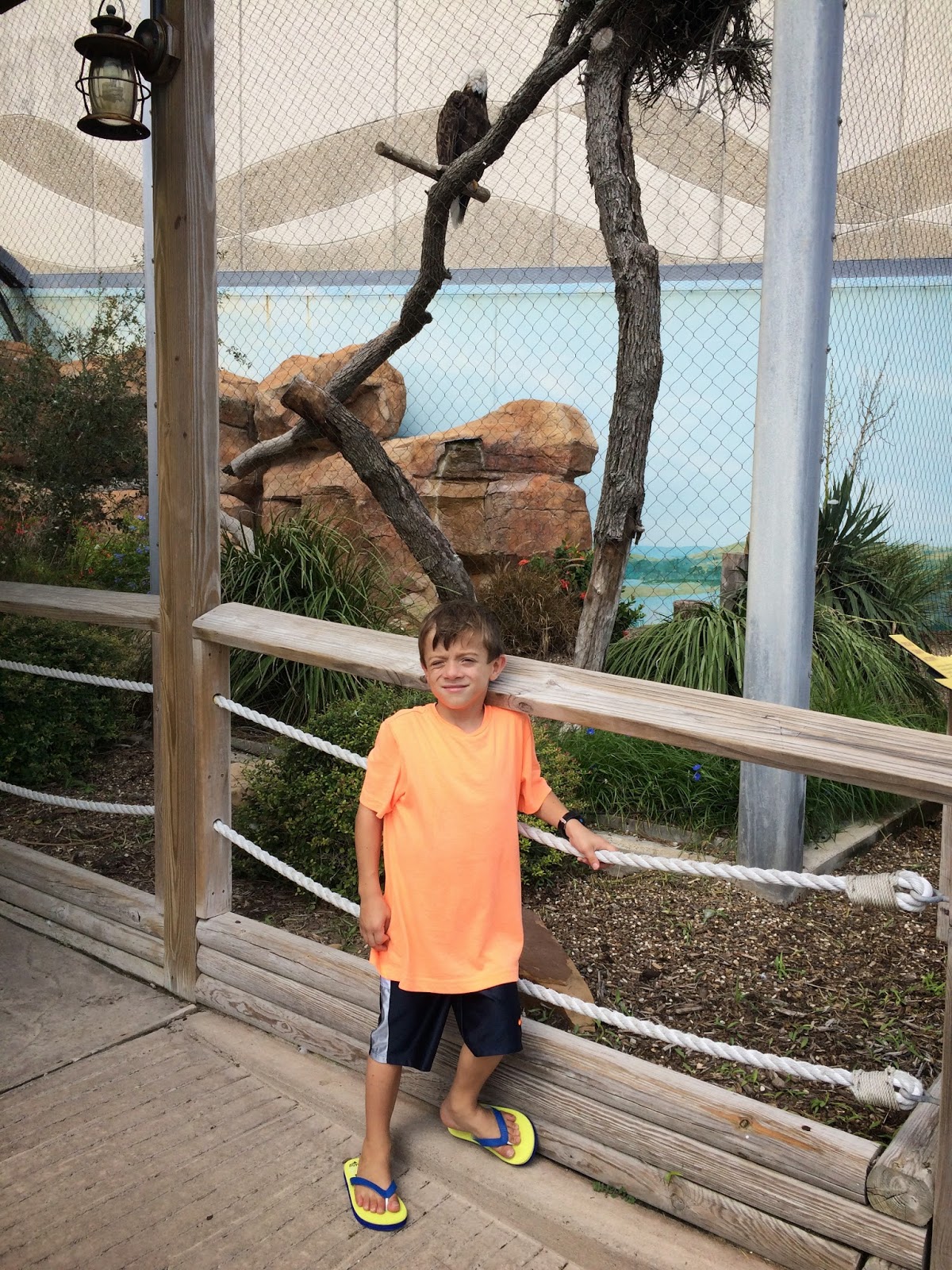 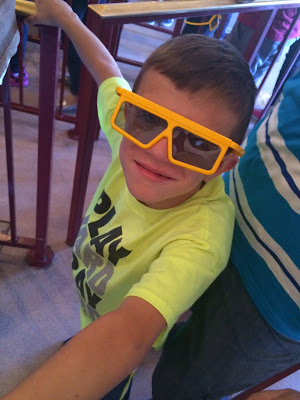 Posted by A Journey for Joshua at 7:47 PM No comments: 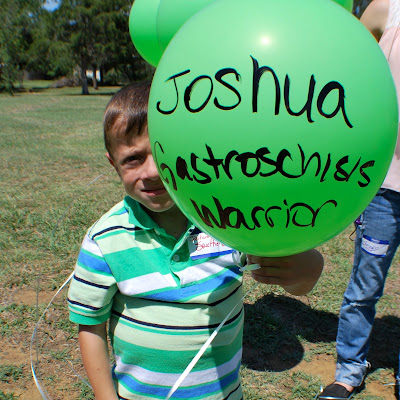 One year has passed since my last post. This past weekend we joined many other families in raising awareness for the the birth defect that has changed our lives forever. The kids had a blast and it's always wonderful meeting others that are in your shoes or just stepping into them.

There hasn't been much to report, which in our world is a wonderful thing! Joshua's doing well. He's been on growth hormone therapy for over a year now and is steadily growing. The doctors would like to see a little more growth, but any is an improvement from the year before! Between his 5th and 6th birthdays he grew 1/2 inch. He quadrupled that amount this past year.

On top of the growth, he seems to be balancing his electrolytes on his own much better. We've had a few bumps in the road, but if recognized early enough and corrected with oral rehydration, we can stay ahead of the game. No ER visits for dehydration so far!!! This is SO BIG! Of course, Joshua still is not a fan of the nightly injections. (Neither am I to be honest!) Who wants to poke their child with a needle every night? 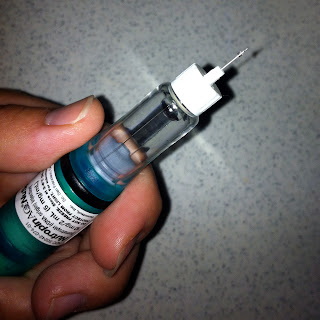 But, even through the discomfort of these shots, Joshua remains good spirited and strong willed. He's determined and I am so very proud to be his Mama. As difficult as the job is at times, I am so blessed by him and the things he's taught me. The one thing in the world this little boy wants is to be like everyone else, to be like his brothers. That's not always possible, but we try very hard for it's achievement. He's had a summer full of family reunions, trips to the beach and warm days in the pool. Joshua wakes every morning ready to eat and take on the world, living his days to the fullest. 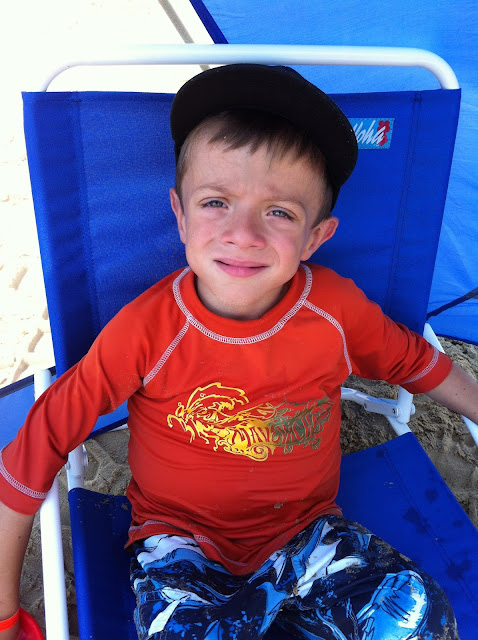 Posted by A Journey for Joshua at 9:35 AM No comments:

Just Around the Corner... With Gastroschisis Awareness Day a little over a month away, please take the time to watch our video. You may come away with it with a better understanding of this birth defect and hopefully a blessing of encouragement. If these kids have taught us anything, it's to keep a strong faith in God and an unstoppable determination. May we all have the GUTS that these kids have!
Posted by A Journey for Joshua at 1:15 PM No comments:

Battling Summer with One Tube Behind His Back! 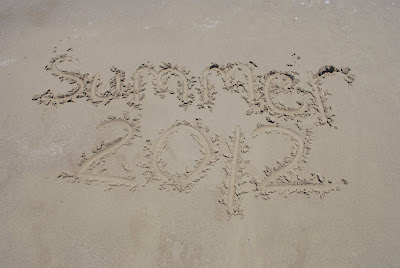 So far this summer Joshua has done remarkably well. I'm amazed at how his little body is copy through heat and humidity. In years past I've dreaded June. It never failed to bring with it dehydration and all expense paid stays at the local children's hospital! But, we've been to the beach, swam in the pool and played outside without any repercussions. THIS IS HUGE! I keep saying that, but I'm not sure just how many people "get it." THIS IS HUGE. 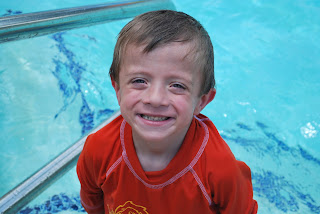 August will make one whole year that Joshua has been off of tpn. If you'll remember he had a booger of a line infection that wouldn't clear and the docs had to pull the line. We experimented with him being off that support and sure enough, he did great! We've continued to supplement his electrolytes four times a day (which certainly does help tremendously) however, I'm wondering if the steroid shots we started Joshua on in May are playing any part in this? Whatever it is, I'm seeing a whole new boy and he won't be stopped! Watch out world! Praying that we will ride this wave through August! 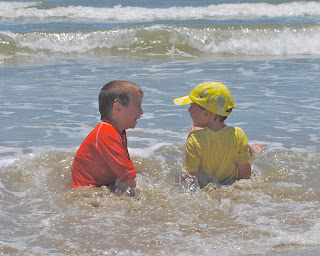 Posted by A Journey for Joshua at 11:23 PM No comments:

Five Steps Forward.... and Only One Back!

That's the silver lining our GI doc gave us today. 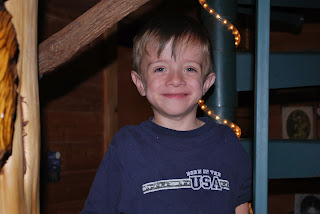 Hey...I'll take it! For so long we've done the one step forward and two steps back dance and quite frankly, I just don't dance! Progress is slow, but progress none the least. To date Joshua has gone FIVE months without a central line! No TPN. No supplemental IV fluids. No line infections.
Progress!

A few weeks ago he did test positive for C diff. The dreaded bug of all Short Gut kiddos.
He may fight off this bacteria for months or years. We're praying it clears quickly cause it's a booger for anyone, much less one with chronic diarrhea as it is.

On top of this, he's still showing evidence of very poor motility, bacterial overgrowth and malabsorption. What's new? BUT.....

GI is happy with his labs and overall health. Absolutely NO signs of dehydration! Woo Hoo! What a wonderful thing this is! Hydration has been the center of our world for almost 6 years. His body, even though technically it's not doing what it should be doing in the GI tract, has figured out a way to maintain it's electrolyte levels!!! Praise God!

We do supplement electrolytes through the g-button, but not nearly as much as it appears he loses. He's always been this tricky chemistry set. But little by little, things are balancing out.

Now, on to weight gain...
We'll be meeting with endocrinology first of March and I'm praying we'll start growth hormone therapy soon. It means a long series of daily shots, but this is our window of opportunity to do something about his size while we still can. Joshua has to undergo a few tests to show that the hormones will in fact benefit him. We'll know in a month or so.

All in all, a great report from clinic!
Posted by A Journey for Joshua at 12:05 AM 2 comments:

It's been a while and there's lots to catch up on. I've been a better facebooker than blogger lately. It's a shame. I just always have more to say than time allows, so I think, "I'll get it caught up later..." 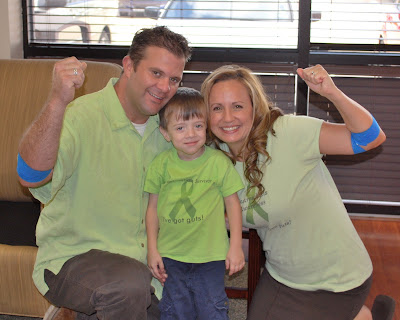 Well, since last entry we celebrated Gastroschisis Awareness Day. An amazing group called Avery's Angels spearheaded this observance day. We kicked it off by Justin and I giving blood. What a great feeling! I think we'll become regulars. 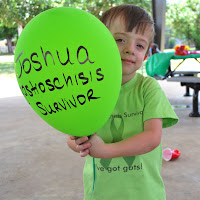 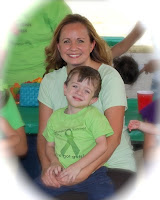 Then later picnic and balloon release. Justin took Joshua for some McD's afterward. What a great day we had. I can't wait for next year, I'm going to get my GUTS group more involved and get something hosted at the hospital.

Just a mere 2 days later, BAM. We were hit with a line infection, 2 bacteria and a yeast all at the same time. We had one sick little boy on our hands. High fever for days. The infection wouldn't clear and his central line was finally pulled. After 3 days of losing IVs we got a PICC line placed and were able to complete the 2 week antibiotic course in hospital. We had an upper GI small bowel follow-through performed and the doctors were very pleased. Joshua seemed to be doing well enough that we thought it'd be a good time to try to go without the line. 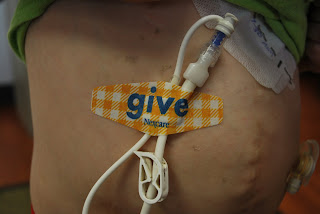 So now we're home, no central line. No backup safety net. Kinda scary, but very exciting! If Joshua can prove himself this is the beginning of a new life for us.

Stepping out on faith.

Praying, please God keep Joshua hydrated! Please let this be his time. We've waited so patiently for the past 5 years. I so badly want him to step forward without stepping back.

A Successful Day in the Heat

Recently our family set out for our first family outing in a long time. Thomas was in town and we couldn't pass up the chance for the boys to see him life-size in person. Armed with plenty of electrolytes we were off.

In the past, a whole afternoon out in the heat would be a recipe for disaster for Joshua. In no time at all his eyes would loose their brightness, sink in and develop dark circles below them. His cheeks would look hollow and his lips would dry out. He'd barely be able to talk, not ever taking a full breath while hardly opening or closing his mouth completely. You could see it a mile away.

For the longest time I had standing orders (and honestly, probably still do) to be able to give Joshua bolus IV fluids if I felt they were necessary. I had to on many occasions.

But this outing rewrote history for Joshua. He handled it like a champ. Never complained of being too hot, (the high was close to 90) never was extremely thirsty and ate a hot dog fast enough to put a grown man to shame. In fact he finished his brother's too.

Justin and I couldn't have been happier. It was so great for us all to be out together and not stop dead in our tracks for some sort of emergency. Don't get me wrong, I don't plan on pushing Joshua to the limits any more than that. But it's good to know on occasion his body can handle a little more on it's own now.

Thank you Thomas. What a day!
Posted by A Journey for Joshua at 10:37 PM No comments:

A Journey for Joshua
Joshua was born with gastroschisis and lost the majority of his small bowel. He now is diagnosed with Short Bowel Syndrome, Malabsorption and Chronic Diarrhea. He has been the strongest person I've ever known since day one. Our goal was to create an independent individual that wasn't confined to his "illness". On his own, Joshua is just that. He doesn't think there is a thing wrong with him and he already seems to respect his limitations. Joshua is a fighter, wise above his years. There is so much to admire about this little guy. Thank you for taking an interest in our family and please remember us in your prayers. Short bowel syndrome will be a lifelong illness and our trials are daily. ~Dana & Justin